Day 1:
On Day 1 of the conference, along with the opening ceremony, wherein T.K.M. Sandeep, the CEO of DEF gave a welcome speech, the Chief Guests Shri. B. Venkatesham IAS, Secretary to Government of Telangana, Cultural & Tourism Department, Dr. Joseph Murray and Mr. Mark Berry in addition to Mr. A.S. Narayanan, the President of the NAD, and Mr. Sanjay Jain, Director of PMJ Jewellers and official sponsor of the conference, addressed the audience and conveyed their best wishes for the success of the conference. In addition, deaf stewards of ‘Talking Hands’, which is the restaurant run by DEF in Hyderabad with support from the Telangana Tourism department, were given awards for their stellar service and untiring efforts in contributing to the success of the restaurant.

Education:
The first day focused on Education and had five sessions in all. The first session was presented by Mrs. Indira Ghosh, a Sign Language Interpreter and linguist from Kolkata, on Sign Language Rights. She talked about the technical and linguistic aspects of why Sign Language should be included as a scheduled language in the Constitution of India and ended her session with a call to action to fight for Sign Language rights.

Methods and Merits:
The second session was presented by Mr. Ashish Dowal and Mr. Bunty Saini, who are trainers from the Haryana Welfare Society for Persons with Speech and Hearing Impairment, on the Early Intervention Program of which they are a part. They listed out the method and merits of this program, familiarised audience with the process of language acquisition at an early age in children and explained the positive changes seen just by teaching them using the medium of sign language.

Obstacles:
The third session was on “Adult Education” by Mr. Hari Hara Kumar, the General Secretary and Academic Director of DEF. He outlined the issues faced by adult learners and the obstacles faced in the dissemination of knowledge to previously untrained individuals. He also mentioned the programs conducted by DEF towards the education of the Deaf community.

Sign Language Rights:
Session 4 of the day was by Dr. Joseph Murray of the World Federation of the Deaf. He enlightened the audience on the topic of ‘Sign Language Rights’ from a global perspective. He offered his vast expertise on the framing of sign language laws and helped the audience formulate an idea of what kind of bill should be passed with regard to sign language in India.

Action Plan of NAD:
The final session of the day was ‘the Action Plan of NAD’ presented by the President of the organization himself, Mr. A.S. Narayanan. He talked about the achievements of NAD with regard to increasing the visibility and accessibility of the Deaf like including subtitles for TV programmes and having an interpreter for the national news on Door Darshan Channel. He ended the session with the long term goals of amending the national policy, the Persons with Disabilities Act and to upgrade the Rights of Persons with Disabilities Act.

DAY 2:
The second day of the conference focused on the topic of leadership among the Deaf Youth. As an introduction, the first session was the Action plan of the Youth Section of the NAD (NADYS) presented by Mr. Ravindra. All the young people who were responsible for the setting up of the youth section were introduced and applauded.

leadership:
The second session of the day was by the enigmatic Mr. Mark Berry, where he outlined the qualities of a good leader and explained the importance of learning from past struggles and mistakes as well as acknowledging milestones and achievements. He also said that sharing your experience with people is as important as being receptive to the constructive criticism and advice that other people have to offer to you.

SWOT:
The third session was jointly presented by Mr. Mark Berry and Dr. Joseph Murray. They introduced the team of WFD and talked about their activities. The highlight of the session was the SWOT (strength, weakness, opportunity, threat) analysis that the audience was made to do. They split up the audience on the basis of the state to which they belonged and from this emanated a healthy and fruitful discussion on the problems and achievements of each state with respect to the Deaf community and Sign Language.
At the end of the session, the chief guests were felicitated.

Women Empowerment:
It is of the conference was centred on Women Empowerment. Two consecutive sessions were conducted by Ms. Amba Salelkar, a lawyer and disability rights activist working with Equals Centre for Promotion of Social Justice, Chennai. She talked about the misconceptions about women as the primary caregiver, equal opportunities and problems faced by women in the Indian as well as global context. The second session mainly focused on the rights of women with disabilities and how they can seek redressal for their issues. The special provisions laid down for their aid were explained and it was of prime importance as deaf women are in particular susceptible to being victims of sexual crimes.
Geeta Sharma, the Secretary for Women and Acting Secretary in the NAD, gave a detailed explanation of the nature of sexual abuse in a lucid manner. She was supported by many women members of the audience who came forward to share their experiences and stories. It was quite an experience of the male members of the audience to listen to these strong women and some men had stories of their own to tell.
It is to be noted that the National Deaf Conference of 2018 touched upon the most sensitive and imminent issues that needed to be discussed as planned. It has given way to much banter and has sprouted many ideas in the mind of the delegates which will further help them to plant the seeds for a better future for the Deaf community and continue to fight for their rights. 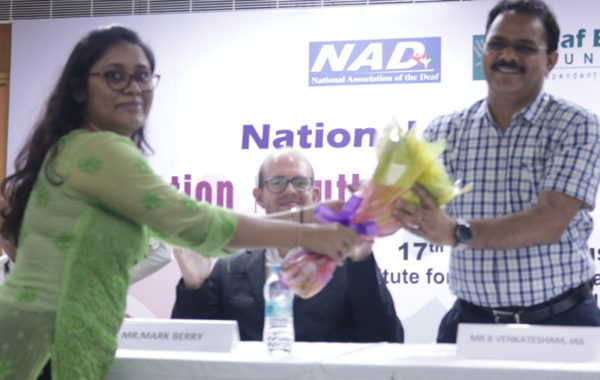 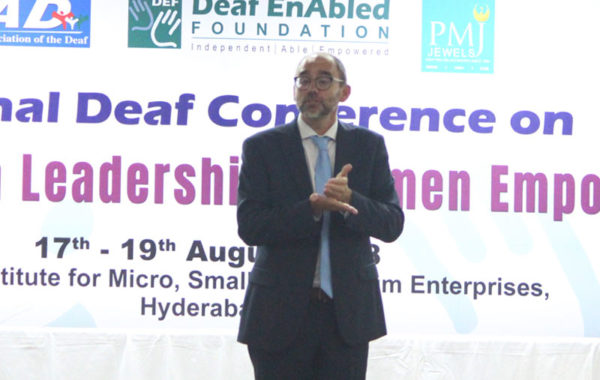 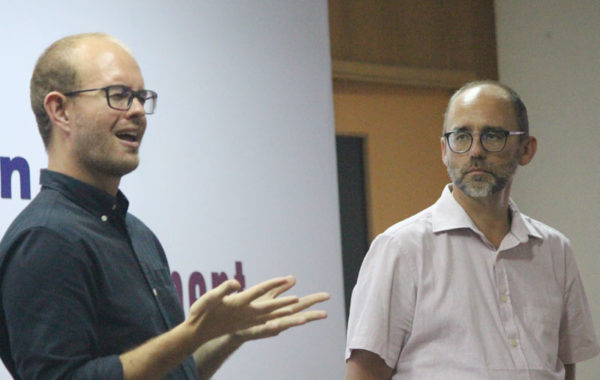